The demands of managing a smaller team should not be under estimated. No matter how small or large, the need for tactical operations exists. When you have a small team, people may think that it is easier to manage. But in today's world of data driven decisions, now matter how big or small, the need for data is omnipresent.

Data driven decisions are a big element of large studios these days, and the discipline has made its way down the scale to smaller teams. The need to employ some kind of data analytics and informational analysis on almost every decision made has become an everyday task.

Leading a team that previously had zero information gathering is challenging. I had already dealt with collecting and analyzing data with former teams, one with 75+ team members. So when we soft launched project management software within three months of operating, I was able to analyze early data to see what we could learn from it and utilize to iterate our operations and processes. This allowed us to ramp up quickly and improve upon our original implementation plan, which resulted in bringing more work to the team and cost savings for the greater organization.

Our first presentation of the data was actually exciting. Presenting data to show our areas of growth and other KPIs created a desire for more data by the senior management team. With a smaller studio though, learning where to take a step back and where to dive further is important to learn. There are so many things to consider when thinking about analytics in a smaller studio, the biggest of which is there is a lot less actual data--seemingly small changes can create a big impact on the numbers.

But just because you're a smaller studio and dealing with numbers of a lesser amount than a larger agency doesn't mean the technique varies extremely--getting analytical foundations in from an early stage can be hugely beneficial for future successes. From my own experience, the approach to data analysis between small and large studios doesn't change much--it's just your capacity to dive deep that really alters.

In smaller teams we try to run the same kinds of reports and take on similar initiatives, but often leaders of small teams have to wear several hats and therefore it is really difficult to get this type of work done...and when you do, it simply takes you longer as you try to fit it in along the way.

Regardless of how analytics plays into decision-making, the effort to implement, collect and educate teams and senior management on creative operations metrics is a huge and ongoing effort. In order to execute on strategic ideas (regardless of team size), the need to execute the tactical portion to support ideas and change exists and is time consuming. So what's the solution? If you have the ability to implement changes, then consider investing in someone to take on this role--an operations role. According to the 2016 In-House Creative Industry report, almost half of teams have a role dedicated to focusing on the department's process, systems and technology, vendor management, and/or financial management and reporting. If your studio doesn't have the time or is not flexible enough to implement change, then maybe all the time spent on data analytics is not worth the investment. However, collecting the data (specifically time tracking data) is always worth the effort.

Regardless of how small or large the studio, there will always be benefits and challenges, but knowing how to navigate through them will help lead to success. 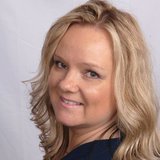 Christine Molinaro has more than 16 years of experience in leading design, digital and account/project management teams. In her current role, she is the Interim Director of Creative Services at BD, managing both on-site and remote creative teams. She has also been the Studio Manager for the Cella Studio at Novartis, wherein less than a year she built a team whose billings have doubled. She also was the Associate Studio Manager at Merck, implementing their strategic project management team and process from the ground up, overseeing all aspects of the creative studio. In addition, she played a key role in helping Verizon stand-up their in-house agency in NYC.